Click here for “A Taste of Brevard in Pictures”

The Areas We Serve the Best

Cocoa Beach, often referred to as “Orlando’s Beach” is most popular on the central Atlantic coast.

Cape Canaveral is near the Space Center and nearby Port Canaveral.

Indialantic is home to some of the finest shops and restaurants on it’s well known 5th Avenue.

Indian Harbour Beach is a smaller city that includes some of the areas most prestigious real estate.

Melbourne is often referred to as the Science Center of Florida.  The numerous NASA related Aerospace companies and FIT contribute to this notion.

Melbourne Beach like Cocoa Beach and the Sebastian Inlet, is a great area to surf and has an interesting surfing history.  It’s a Town that embraces the concept of community.

Palm Bay is the largest city in Brevard.  It saw a particularly rapid development during the early part of the Decade.

Rockledge borders the Indian River on the Mainland side.

Satellite Beach, is a  City which grew rapidly from when the Space Center was established.  It has a large canal system providing great waterfront living.

Suntree is a popular, stable and upscale community some of which is oriented around the Suntree Country Club  It is unincorporated and therefore technically part of Melbourne.

Titusville is the City that has probably suffered the most with the recent NASA cutbacks.  It is definitely rebounding however and will gain even more once NASA funding increases.  It’s a great place to view rocket launches.

Viera is a planned community that is large and still growing rapidly.  It’s the County seat.  It is also home to the Washington Nationals Spring Training at Space Coast Stadium. 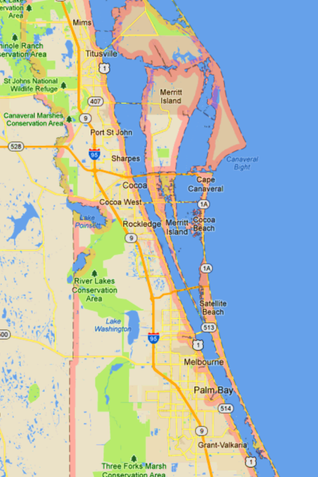 For more information on communities, call or email me personally.